Landscaping and Lawn Care Professional / man of many talents!

With more 15 years of Landscaping and property maintenance experience. at about age 29 Chris Foley decided it was time to venture off and try his hand as a business owner doing what he loves – so naturally that was to be a landscaping business. Now he is incredibly thankful beyond words to his initial loyal clients and family for giving him the opportunity to do so, with their encouragement, support, and help along the way as he got his start and continues to grow every day.

Chris was born in Worcester, MA in 1985, but raised In Dennis, MA and has lived in various town on Cape Cod, MA for the majority of both his young and adult 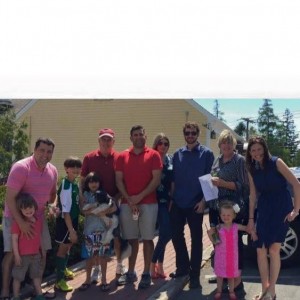 Chris Foley (the talll one) and his Family

He attended school at Dennis-Yarmouth Regional High School in Yarmouth, MA (class of 2003), playing sports and working part-time Landscaping during the summer. as well as the University of Massachusetts, (Amherst, MA), and Cape Cod Community College (Barnstable, MA), studying Computer Science before switching his concentration to Business Management and Horticulture. During this time he got his first experience in larger scale landscaping & maintenance, working part-time Landscaping during school, plus eventually learning to manage other employees when he spent five years working as a seasonal crew leader (foreman) for the Grounds and Landscaping crew at the Department of Public Works in both Dennis, MA and then Chatham, MA.

His first business venture and road towards entrepreneurship started in 1999 when he was 14 years old: his love of sports, computers, and technology gave him the idea to create a popular baseball-related website that gained over a million views. For over 10 years he spent his spare time writing articles, filling orders from the website selling popular tee-shirts he created, and handling all of the business aspects himself (eg: marketing, selling advertisement space, accounting, and even doing occasional press/media interviews (in both print newspapers/magazines, as well as several popular local and national sports radio stations. This first self-owned business also lead to occasional part time job opportunities as a freelance writer and freelance web developer in his spare time. (when he wasn’t  otherwise working full-time day jobs or going to school).

After attending school and his first few years of landscaping experience on Cape Cod, Chris moved to and spent the next several years in Boston, MA; first working and gaining experience as a Property Manager for a small motel and about a dozen residential apartment rental buildings around the city (Handling business management tasks, as well as being in charge doing general maintenance, repairs, simple construction, and of course, landscaping and grounds-keeping the properties. While in Boston he was lucky enough to get a second-job working several seasons at Fenway Park for the Boston Red Sox.

After property management, he changed careers and began working as a contractor for Dig-Safe, (locating and marking underground electric/phone/cable utilities in the Boston Metro and greater-Boston area) which without a doubt one of the funnest, interesting, and adventerous jobs he’s ever had.

in 2011 Chris moved back to Cape Cod, and was offered a great business opportunity to gain experience and work in the Real Estate industry for 4 years while accepting a job offer in the management office of a popular Cape Cod shopping center mostly handling the many aspects of commercial Leasing. Chris is still currently a licensed (but not practicing) Real Estate agent. During this time he continued working part time Landscaping and Maintenance during weekends (as he has continuously for over 15 years now)

Eventually his love of being outdoors, living on Cape Cod, and Landscaping in general, found himself drawn back to the industry full-time before eventually deciding to venture off on his own and start Foley Landscape Services in the summer of 2015, and hopes he has the opportunity to speak/meet with you soon!

He’s thrilled his first year was more successful than he ever initially hoped (officially still in business for another year!) and is now looking forward to meeting many more of you in 2016!

Fully-insured and happy to work on residential, condo, or commercial jobs. Aside from Landscaping please referr to a very incomplete list of maintenance/handyman tasks Chris would be more than happy to take care of for you as well as your Lawn Care Service!

Christopher Foley currently operates Foley Landscape Services from  14 Prince Way, South Dennis,  MA 02660 (from his home office/garage, which he very much hopes to upgrade out of to a larger and real shop this summer. Your help getting that done would be very much appreciated!

Contact Chris today for a free quote! He hopes to speak with you soon!

(Unfortunately I am sometimes unable to answer calls right away, and many turn out to be telemarketers. If You happen to catch me at a bad moment and I am unable to answer your phone call, please don't hesitate to leave me a quick voice message and I will get right back to you as soon as possible....and appreciate it a ton too!) Cheers! -Chris
Review us on Facebook

Review us on Google+

http://www.FoleyCapeCod.com
If you are considering buying or selling property on Cape Cod, consider contacting Steve Foley. A Licensed Realtor / Salesperson currently working with Seashore Properties based in Chatham, MA. Steve has lived in Dennis, MA with a career spanning over 30 Years on Cape, and has gained much knowledge of the area that he uses it to his full ability t to help with the smoothest possible transaction! Steve's friendliness, dedication and knowledge of Cape Cod & area Real Estate is nearly unmatched and he'd be honored to speak with you about any of your thoughts/needs You can reach him at (508)776-9443. He currently Specializes In Beachfront Residential properties in the Mid-Cape area.

Flat Rate Mows and Hourly Rates between 15%-20% less than nearly all our competition! Contact Chris Today!

Almost time to start thiking about Lawn Service for 2017. Just a reminder all mows are between $35 and $45 Flat Rate! No contracts or commitments! Schedule Weekly, Bi-Weekly or "As-Needed" Lawn Mowing. Free Estimates on Spring/Fall Yard Cleanups, Hedge/Shrub/Tree Trimming or whatever else you may need too! Our hourly rates are on average 15%-20% LESS than most larger Landscaping companies on Cape Cod! And we guarantee the same or better quality work just you should expect from your Landscaping & Lawn Care Professional! We are fully licensed and insured with over 15 years of experience in the industry Call for a FREE estimate, I hope to hear from you soon! Chris Foley (owner)
Foley Landscape Services
14 Prince Way
South Dennis, MA 02660